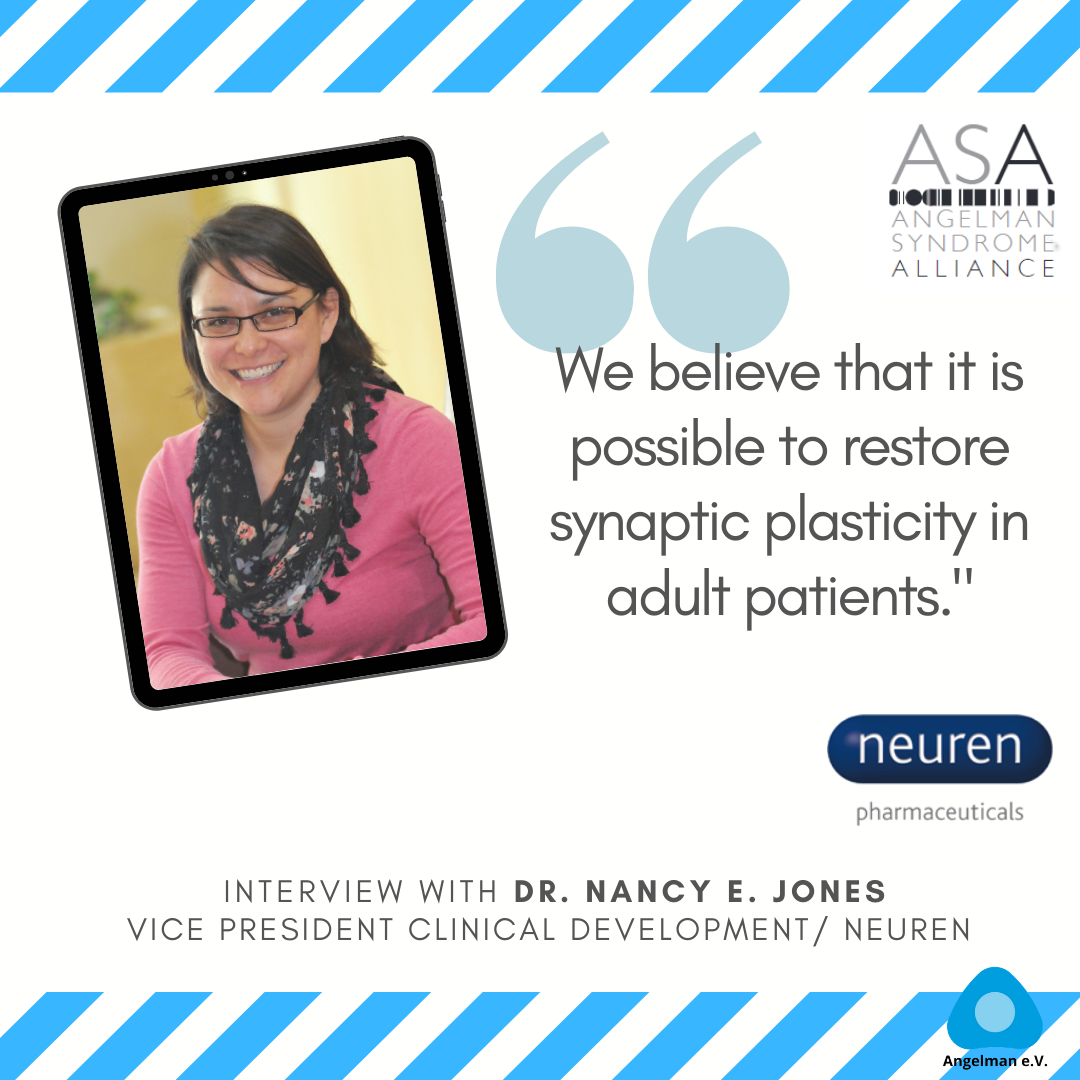 Neuren Pharmaceuticals is a biopharmaceucal company focused on developing new therapies for neurodevelopmental disorders. In 2019, the company is causing a stir with its headline: NNZ-2591 has shown positive effects in a mouse model of Angelman syndrome, treating all symptoms of the disease. Meanwhile the drug is in a Phase 1 clinical trial and has Orphan Drug status in the US. High time to explore a little bit there.

Nancy E. Jones, PhD is the Vice President of Clinical Development for Neuren.
She works with her team and clinician experts to design and execute the clinical trials for the development programs. Nancy is passionate about facilita<ng the development of therapies. Her mission is to improve the lives of individuals with a severe neurodevelopmental disorder, such as Angelman-Syndrome.

“Individuals with Angelman and their families deserve high quality, evidence-based information, and the most innovative treatments possible.“

Regarding Neuren’s research in neurodevelopmental disorders, when and why did Neuren start to get involved in Angelman-Syndrome's research?
Neurodevelopmental disorders arise from a range of genetic and neuropathological causes and are characteristically very heterogeneous in their presentation across patients. But many have a similar neurobiological dysfunction in common: problems with the connectivity between brain cells (neurons and their supporting cells). The problem with these connections, or synapses, means that from a treatment perspective, a very diverse range of disorders may actually have a common treatable dysfunction. Neuren’s development portfolio includes compounds that have been shown to improve synaptic connectivity in preclinical models. One of these novel treatments, trofinetide, has already shown evidence in clinical trials conducted by Neuren that it can improve clinical symptoms in other rare, genetically based disorders. Given the underlying problems with synaptic connectivity in Angelman, we felt that our compound, NNZ-2591, could be a potentially useful treatment for Angelman syndrome. Our development program commenced in 2019 with very promising results in an Angelman mouse model after which we received Orphan Drug designation from the FDA.

In Neuren's pipeline, we see your candidate ‘NNZ-2591 in Angelman Syndrome’ already entered Phase 1. How is it going? What are the next steps?
Neuren is conducting a Phase 1 study in healthy, typically developing adults. This study will assess the safety and tolerability of treatment with NNZ-2591 and provide information on how the drug is absorbed and distributed throughout the body (the pharmacokinetics of the drug). The study is currently on-going. AYer the completion of the Phase 1, we will initiate the necessary steps to start an Angelman syndrome study in 2021. This is planned to be a Phase 2 study that will assess safety and efficacy of treatment with NNZ-2591. NNZ-2591 – what is this? How does it work? NNZ-2591 is a synthetic version of a fragment of Insulin-like growth factor (or IGF-1), a growth factor essential for brain development. The fragment, called “cGP”, regulates IGF-1 and inhibits inflammation in the brain. Normal brain function requires mature, well-maintained synapses. The UBE3A deficiency that occurs in Angelman syndrome impairs neuronal communication by reducing the brain’s ability to synthesize proteins needed to build synapses and by impacting microglia, specialized cells that maintain dendrites, the parts of neurons that form synapses.

In which way can Angelman patients benefit from this treatment?
As was noted above, we believe that NNZ-2591 can have an effect on the underlying dysfunction in the synapses and the cells that regulate the growth and function of synapses. Therefore, the aim of treatment with NNZ-2591 is not only to have a fast-acting impact on a particular set of symptoms, but also to have an impact on brain architecture and function, which over time will lead to improvements across a wide range of symptoms of Angelman syndrome. In the Phase 2 study, we will be able to determine the effects on symptom severity in patients and identify which symptoms may be responsive to treatment.

“In the preclinical study in the Angelman mouse model, consistent improvements were seen in analogous symptoms relevant to and clinically important in patients including cognition, adaptive behaviors, motor function and seizures.“

What makes Angelman syndrome interesting from a scientific point of view?
As in most neurodevelopmental disabilities, Angelman is characterized by deficits in synaptic formation, maintenance and function. If NNZ-2591 results in clinical benefits for patients with Angelman syndrome, it will reinforce our belief that it could be useful in a wide range of syndromes for which there are currently no treatments.

How do you assess the future of drug treatment for Angelman syndrome?
The Angelman community is well-positioned to advance the clinical trials needed to develop potential treatments. The scientific advances that have been made in understanding the gene, and methodologies for gene therapy, but also our understanding of the pathology of Angelman syndrome has laid the foundation for advancing studies in both gene-modifying and medicinal treatments. Another important and critical contribution has been the collective efforts of the Angelman advocacy groups and caregiver communities to build the infrastructure to support clinical trials. Resources such as registries, outcome measures consortiums, clinical trial and scientific advisory committees and family-centered trial information have played a critical role in facilitating the development of clinical treatment programs for Angelman syndrome.

“We believe that it is possible to restore synaptic plasticity in adult patients.“

How do you rate the development opportunities of ‘full-grown Angelman brains’ in consideration of NNZ-2591?
The ability to grow new dendrites and to create functioning synapses is life-long although it may be somewhat diminished in later life. Whether the magnitude of clinical benefit is similar and whether longer duration of treatment is required will be assessed in later clinical trials. In a clinical trial of trofinetide, Neuren’s other drug candidate, in ReP syndrome patients up to age 45, the clinical benefit in older and younger subjects was comparable.

Do you plan to roll out the study also into other countries, except Australia?
The locations for the planned study have not been finalized. When study locations are confirmed, these will be announced and posted on www.clinicaltrials.gov.

Is there anything you want to say to the European AS-families? How can they keep informed regarding future clinical trials of NNZ-2591?
Our aim is to be able to develop a meaningful treatment that would be available to all families. As we progress with our program, we will provide updates or announcements on our webpage: www.neurenpharma.com.