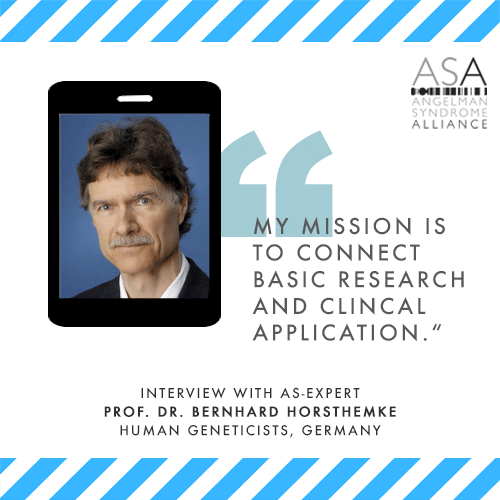 In conversation with Bernhard Horsthemke

Prof. Dr. B. Horsthemke was the Director of the Institute of Human Genetics at the University Hospital Essen from 2001 to 2019. He has been familiar with research on Angelman syndrome for more than 30 years and is one of the leading Angelman experts in Germany. In his research he devotes himself, among other things, to genomic imprinting, which was groundbreaking for the understanding of AS. His outstanding scientific achievements are internationally appreciated.

In 2007 he was awarded the Dr. Claudia Benton Award of the Angelman Syndrome Foundation (USA). In 2016 he received the Medal of Honour of the German Society for Human Genetics (GfH). The genetic studies of Prof. Dr. Horsthemke have contributed to the basis for the ASO therapy.

I started a research project on the genetics of PraderWilli syndrome (PWS) in 1986. When it became known in 1989 that the genetic locus for Angelman Syndrome (AS) on chromosome 15 is also in the region q11q13, I extended the research project to Angelman syndrome. I was also present at the founding meeting of the Angelman Parent Association Germany in 1993.

Prader-Willi syndrome and Angelman syndrome involve genes that are subject to genomic imprinting. Of the 20,000 human genes, only 100 are imprinted. The PWS genes are only active on the paternal chromosome 15, the AS gene in the brain only on the maternal chromosome 15. I was fascinated by this type of gene regulation, in which DNA methylation plays a role. My team has not only revolutionized the genetic diagnosis of PWS and AS with the methylation test, but has also identified the long RNA (SNHG14) that silences the UBE3A gene on the paternal chromosome 15 and which is now the target of ASO therapy. With the ASO, this long RNA is stopped, so that the paternal copy of the UBE3A gene can become active and replace the missing or defective maternal copy. ASA ANGELMAN SYNDROME ALLIANCE Virtual on tour Essen

"I am committed to Angelman Syndrome research because it gives us new insights into the regulation of imprinted genes, which can also be important for the development of future therapies“ 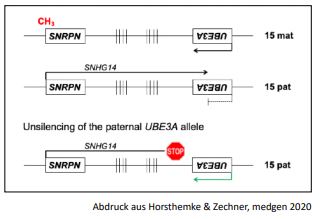 How do you assess the future of Angelman syndrome?

Unfortunately, a causal therapy is not that simple, and I do not believe that there will be a complete cure in the foreseeable future. However, I am confident that some symptoms can be alleviated in the future, but only if you start the therapy very early. This therapy will probably have to be done for life.

What do you expect from the clinical trials of ASO therapy? How can Angelman patients benefit from ASO therapy?

The ASO studies planned for 2020 will focus on the tolerability and possible side effects of ASOs, on finding the right dose and on verifying that the chosen clinical endpoints are appropriate. These studies will involve very few patients. Only when the ASOs have been proven to be safe will further studies involving slightly more patients be carried out in order to see if and which symptoms improve under therapy.

"My mission is to connect basic
research and clinical application.“

What experiences do you and your team have with ASO therapies for other diseases?

In spinal muscular atrophy (SMA), ASOs are a success story. Here, the treatment clearly leads to an improvement in the clinical picture. The success was so convincing in the first study that it was discontinued in order to be able to treat more patients.

What role do you think Germany plays in the development and research of AS drugs?

Unfortunately, Germany does not play a direct role here. However, Germany is a good location for clinical trials. In addition, our health insurance companies – more so than the health systems in other countries - are prepared to cover very expensive therapies.

How do you assess the developmental possibilities of "grown-up Angelman brains"?

That is hard to say. Although older brains still have some plasticity, I am skeptical about this. Experiments in mice show that the best effects can be achieved by switching on the UBE3A gene as early as possible, preferably before birth.

Are there (comparative) studies that show that an unused brain area has been reactivated after causal therapy?

So far there is no causal therapy for other genetic brain diseases. It is known that other brain regions can step in a`er injuries (accident, stroke). However, these are regionally limited injuries; this situation cannot be compared to Angelman syndrome. In Angelman syndrome, all brain cells of a certain type are affected; no other cells can step in, but the affected cells have to be "repaired".

They expand the AS parent association competence as a medical advisory board. Without hesitation, you have promised, why?

In rare diseases, there is a mutual give and take between parents and patients on the one hand and researchers on the other. Parents and patients benefit from our exper.se and we benefit from their experience and samples for our investigations. Since our research is funded by society, I think it is morally imperative that we researchers also give something back to society. One possibility is to participate in parent support groups.