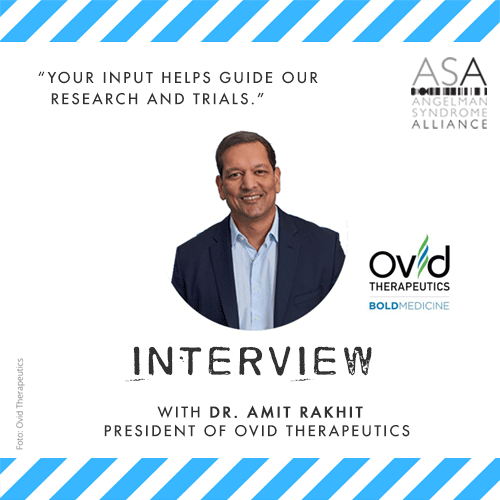 At Ovid, we believe that neuroscience is the next frontier for exciting research and developments for medical therapies. However, there is still a lack of understanding of the complexity of the brain and nervous system, as evidenced by the many failed trials for the more prevalent conditions, and a lack of research in the more challenging orphan neurological diseases. However, we saw that the research was evolving very rapidly. Early in the history of Ovid we began to understand that neurodevelopmental conditions such as Angelman syndrome had no therapies directly addressing them. Since the company launched in 2014, our first focus was working to understand how our lead therapeutic candidate, OV101 (gaboxadol), may play a role in treating Angelman Syndrome.

From a scientific point of view, deficits in GABA levels or functioning have been associated with the symptoms of Angelman syndrome due to what we believe is a fundamental mechanism of the condition which is an imbalance in tonic inhibition. Tonic inhibition is the ability to differentiate ‘signal’ in the brain from background ‘noise’, and is mediated by two key chemical messengers (neurotransmiPers) in the brain called glutamate (which is ‘excitatory’) and GABA (which is ‘inhibitory’). The lack of GABA in Angelman syndrome leads to lack of the inhibitory signal and thus to many of the symptoms we see in Angelman syndrome. OV101 is an oral drug in late clinical development for Angelman syndrome, and could potentially be the first therapeutic option to make a meaningful change for individuals with Angelman syndrome and their families by addressing the severe symptoms of the condition.

How do you assess the future of drug treatment for Angelman syndrome?

Current treatment approaches in Angelman syndrome focus on managing specific symptoms. There is a high unmet medical need for therapies that target the root cause of the disease and improve these symptoms. At Ovid Therapeutics, our mission is to make a difference. A difference for rare neurological disease communities that truly need it and a difference in a field where change does not come easily: neuroscience drug development.

If OV101 - Gaboxadol is approved, what can we expect? How can Angelman patients benefit from OV 101?

Tonic inhibition is an important mechanism in the nervous system because it modulates the ability of cells in the brain to distinguish a real signal from noise, and deficits in GABA levels or functioning has been associated with the symptoms of Angelman syndrome. Studies of OV101 in animal models of Angelman syndrome show OV101 may restore tonic inhibition, improve gait and balance, improve memory, and have positive behavior effects. Our first clinical study in Angelman syndrome with OV101, called STARS, showed signals of improvement in several symptoms of Angelman syndrome including sleep, motor Dr. Amit Rakhit is president and Chief Medical Officer of Ovid Therapeutics. He is responsible for the drug development and commercialization of new drugs in the Ovid porWolio. Dr. Rakhit worked in India together with Mother Teresa at the Missionaries of Charity (CalcuPa). He is commiPed to human rights and has been working in the health sector for over 20 years. Virtual on tour ASA ANGELMAN SYNDROME ALLIANCE New York „For the future of Angelman patients, I hope to make a meaningful change for individuals with Angelman syndrome and their families and bring about positive impact in their daily lives.“ Dr. Amit Rakhit Ovid Therapeutics Page 2 function, and behavior. Research of OV101 in individuals with Angelman syndrome is now in the Phase 3 stage as the NEPTUNE study in children ages 4-12 years old and we expect to have results from this trial in the 4th quarter of 2020.

How does the drug OV-101 work? Which ASpatients will benefit most of that treatment, concerning age and genotype?

Our lead therapeutic candidate, OV101 (gaboxadol), is a first-in-class, oral, highly selective extra-synaptic GABAA receptor (GABAAR) agonist. It passes the blood-brain barrier and binds tightly to the unique extrasynaptic GABAA receptors on neurons throughout the brain, restoring the levels of tonic inhibition that exist when intrinsic GABAA levels are low. OV101 is different than other GABAlike compounds because it is a pure agonist. That is, it can interact with the GABA receptor directly just like GABA normally does. Other compounds are typically allosteric modulators, that is they need intrinsic GABA to be around to have their effect. Also, OV101 primarily acts in the extrasynaptic space, which is the area around brain cells (neurons) that is thought to be heavily involved in tonic inhibition. We believe that all ages of individuals with Angelman syndrome will benefit from therapies given our results from the STARS trial which occurred in adults and adolescents and our hopes for the NEPTUNE trial results in children. However we will need to await these trial results to have a bePer understanding. It is encouraging to see that emerging data in individuals with Angelman syndrome seem to indicate that all ages have the potential to respond to clinical and medical therapy. As to genotypes, we are continually learning, and we will need to do more research to understand specifically if there are certain genotypes that respond differently than others.

More to come. Please tell us something about OV titi1. What is that? What can we expect of this treatment?

Ovid Therapeutics is advancing the search for therapeutic options for Angelman syndrome in addition to OV101. With OVtiti1 we are currently exploring microRNA and its involvement in regulating UBE3A antisense that blocks UBE3A expression. The most common cause of Angelman syndrome is the result of the loss of functional UBE3A protein due to defect of UBE3A gene. Our aim is to develop a disease-modifying noncoding microRNA vector that reduces expression of UBE3A-antisense and restores UBE3A expression. We are in early stages of our research and hope to announce more soon.

How do you rate the development opportunities of "full-grown Angelman brains"?

As mentioned previously, there seems to be emerging research that suggests that all ages of individuals can benefit from clinical and medical therapies, so that young as well as older individuals may see positive changes. We were encouraged by the signals we saw in the data from our STARS trial in adolescents and adults (ages 13-49 years) so we are hopeful that the signals we saw there will be confirmed in our phase 3 trial NEPTUNE.

How important is Ovid Therapeutics in terms of future treatment of AS?

OV101 is currently our lead program in clinical development for Angelman syndrome and could potentially be the first therapeutic option to make a meaningful impact in the lives of individuals with Angelman syndrome and their families. We hope to make a meaningful contribution to the science, understanding, and future treatment options for this condition.

Is there anything you want to say to the ASfamilies?

Dedication to us means not only relentless pursuit of meaningful scientific discovery, but also building strong connections with individuals and families with rare neurologic conditions. Being embedded into these communities, I am continually moved by your stories and inspired by your courage. Your input helps guide our research and trials, and continues to influence our overall development strategy. I am honored to work alongside you with the singular goal to provide meaningful impact for those living with Angelman syndrome.